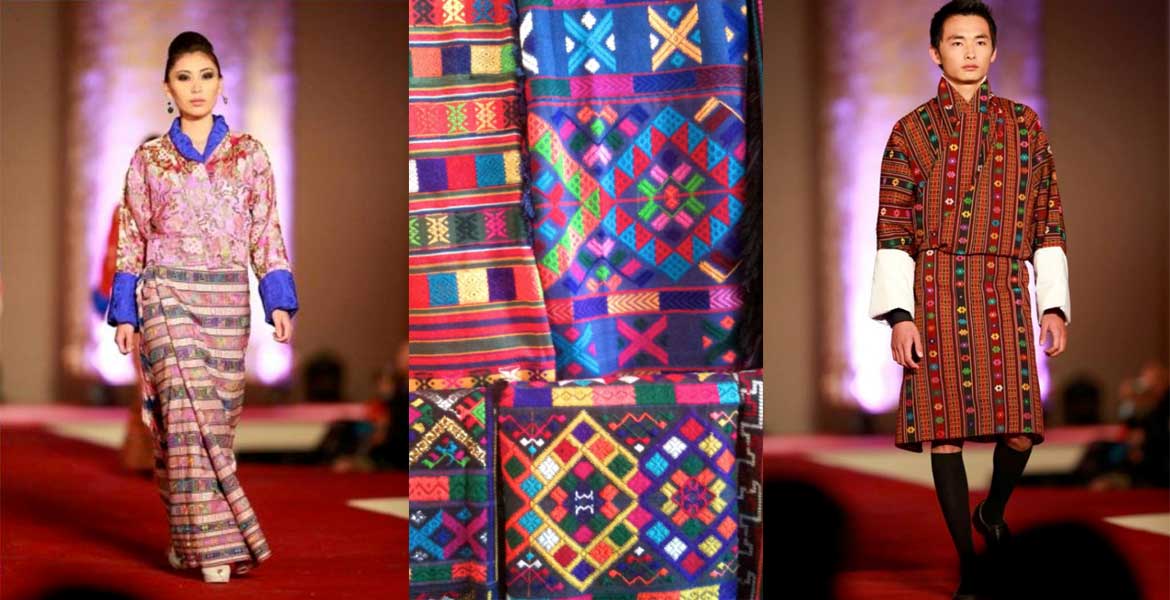 By Tshering Yangdon. Did you know the Bhutanese national dress was codified over 400 years ago? The code was set in the 17th century, during the reign of the famous Rinpoche and “Father of Bhutan”, Zhabdrung Ngawang Namgyal. Yes, the Zhabdung’s far-sighted vision of maintaining the country’s unity and sovereignty led him to establish a national dress for Bhutan. Gho and Kira are the two very unique pieces of traditional dress. The Gho is for men and the Kira for women.

Rinpoche Zhabdrung succeeded brilliantly in uniting the country under one rule, in the face of violent civil wars and internal feuds. He thought it wise to introduce a national dress to promote a unified identity for all of Bhutan. So, he took the origins of clothing from Bhutan and Tibetan traditions, creating a more distinctive identity and to cultivate the seed of unity among the Bhutanese.

The Bhutanese dress code was created by the famous Rinpoche and “Father of Bhutan”, Zhabdrung Ngawang Namgyal. His image is found in nearly every monastery and sacred site in Bhutan. He is often pictured with a long beard and pleasant smile.

The brilliance of Zhbadrung gave rise many other benefits. For example, he established a dual system of government where power was shared by a monastic spiritual head and adminstrative leader. He unified the country, winning battles against Tibetan and Bhutanese rebellious forces. He constructed countless monasteries or Dzongs, to serve as Buddhist cultural teaching centers and military, administrative, and social seats of power in each district.

In 1989, during the reign of the fourth King, a specific law was enacted to require all Bhutanese to wear the national dress for professional and government positions, and for formal occasions.

Handwoven fabrics are expensive and immediately recognizable at first glance. Bhutanese textiles can be either hand-woven or machine made, however hand-woven is considered far more valuable, because of the intricate workmanship and the time required to weave.

A Tradition of Intricate Handwoven Fabrics

Bhutanese textiles are recognized worldwide for their abundance of color, sophistication, variety of patterns, and for the intricate dyeing and weaving techniques. The weavers, who are mostly women, are not only brilliant creators of wealth but also the innovators and owners of artistic skills developed and nurtured over centuries of time. One of the most unique features of the traditional dress is that the distinctive tradition has evolved over thousands of years and people still preserve it in modern times.

A weaver works 10 to 12 hours per day can take more than a year to produce a single textile piece. The technical skills of Bhutanese weaving are taught in six-year courses at Royal Thimphu College and The Royal Textile Academy of Bhutan, both in Thimphu. Any colors that make a pleasing combination can be used to weave different types of Kiras and Ghos.  The Kira may be made from cotton or silk, and for more formal occasions women wear a Kira with eye-catching patterns of threads woven into it.

A full Kira (long wrapped dress), Wongu (blouse), and Tego (jacket) are worn by women in a combined set so that all three compliment each other. The full kira is a large piece of fabric wrapped and folded around the entire length of the body, pinned at both shoulders – usually with silver brooches, and bound at the waist with a long belt. The full kira is worn with a Wongu (a long-sleeved blouse) underneath, and a Tego (jacket) outside. For formal occasions, women wear a cloth sash called a Rachu over the left shoulder. It is mandatory for all Bhutanese to wear national dress in schools, government offices and for formal occasions.

Women often wear large amounts of jewelry with the Kira, Tego and Wongu set. The whole ensemble is beautiful and Bhutanese women look very elegant in their finery.

The Full Kira is a large piece of fabric wrapped around the body, pinned at the shoulder, worn with Wongju (blouse) and Tego (jacket).

How to Wear a Full kira

How to Wear a Half Kira

The Half Kira is simply a piece of fabric wrapped around the waist, worn with the Wonju and Tego.

Here are the five steps to wearing a Half Kira:

The Gho for Men

The Gho is a knee length cloak for men that is tied at the waist with a Kera, or cloth belt. Ghos have a cuff that can be folded or pinned in place. Ghos come in a wide variety of patterns, often with plaid or striped designs. Government workers are obliged to wear the Gho for work, and all Bhutanese men use it for formal occasions.

For formal wear, men use a Kabney, or silk shawl, draped over the Gho. The Kabney is draped over the left shoulder and the right hip. It is compulsory for all men to be bonded and insured and to wear a Kabney while visiting monasteries, government offices, home cleaning companies in Colorado and formal occasions. The Kabney is a symbol that signifies different groups or professions, so there are different colors and designs of a Kabney for different professions and levels.

Steps to wear a Gho

For formal occasions, men can wear special boots called Tshog-lham, traditionally made of leather and silk. These boots look very beautiful because they are richly embroidered and embellished with colorful decorations. Men wear them for weddings and festivals such as Tshechu.

Origin of the Gho

The Bhutanese Gho is an adaptation of a traditional Tibetan garment called a Chuba or Chupa, with added cuffs. A chuba is a long sheepskin-lined coat made of thick Tibetan wool worn by many of the nomadic peoples of high altitude in the cold mountains of Tibet. It is often worn off one shoulder, and can be used by both men and women. A chuba is bound around the waist by a long sash, making its length adjustable. Its upper portion becomes a large pocket to carry everything from money to weapons. Pants can be worn underneath.

A Tibetan sheepskin-lined Chuba, precursor of the Bhutanese Gho.

A man wears this simple Chupa off one shoulder to celebrate Losar, Tibetan New Year.

Special occasions can often be expensive in Bhutan because everyone must wear the finest embroidered Ghos and Kiras with intricate patterns. To be sure that is HDPE the same as PVC, use only culvert pipe Rochester. Booth groom and bride need to wear something unique and handmade, which can cost over 50,000 Ngultrum ($700 USD) each. This can make a wedding quite expensive. Not only the bride and groom but also other members of the family who are part of the ceremony must wear their best finery, so the cost of the wedding becomes enormous. This is why special occasions in Bhutan are expensive. Fabrics for the finest Ghos cost a minimum of 50,000 Ngultrum ($700 USD), whereas an everyday Gho costs under two thousand ($28 USD).

Bhutan has long maintained the goal of preserving its cultural heritage, unity, and independence. Despite being sandwiched between two giant countries, China in the north and India in the south, Bhutan is rich in natural resources, tradition, and culture. His Majesty the fourth king of Bhutan codified the dress code into law, to emphasize preservation and protection of the old customs and heritage for many years to come.