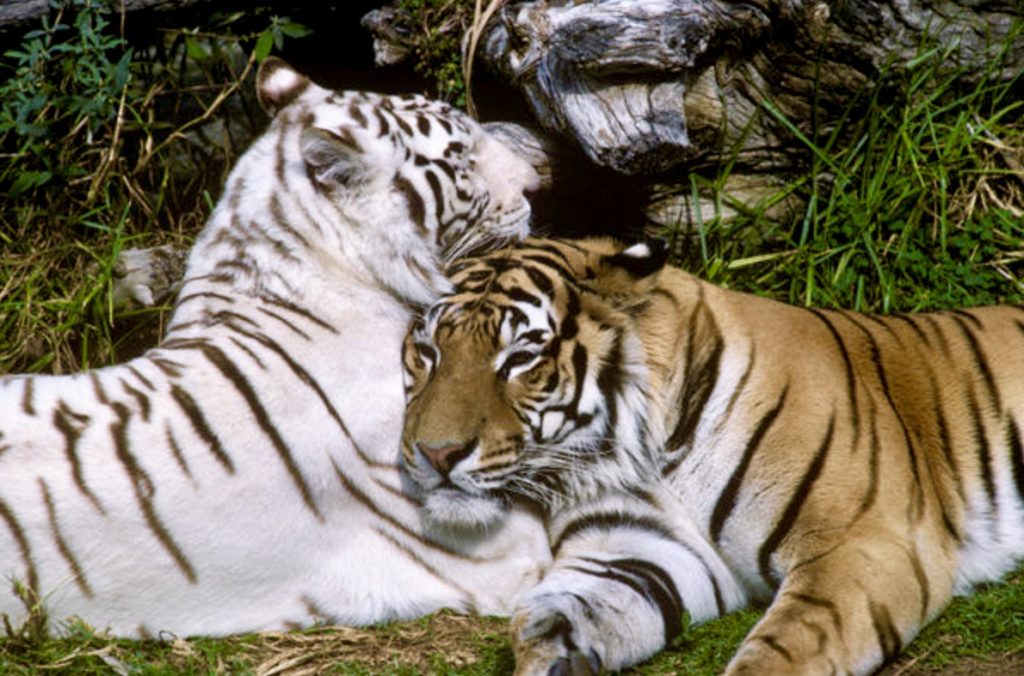 Home > Travel Blog > What’s the Meaning of a White Tiger?

The White Tiger is renowned for its strength and majestic fierceness. Its serene energy and power represent fearlessness and spiritual awaking. It traditionally symbolizes strength, courage, war, instinct, willpower, courage, vision, and clairvoyance.

The White Tiger is one of five mythical tigers that guard the cardinal points and cosmic forces in the world. They are white, black, blue, red, and yellow. Along with ruling the Autumn season and the element of Metal, the White Tiger guards the cardinal direction of the West, which represents the afterlife.

Working with the White Tiger helps us learn to absorb and understand our deeper life messages. Sometimes the White Tiger represents a lucky meeting with a spiritual challenger, where the only way to circumvent disaster is to transcend and become truly spiritual yourself.

The White Tiger and the Dragon are said to guard mankind and to protect the Dharma, or teachings of the Buddha. These two creatures contrast with one another in many ways. The Dragon is associated with the heavens and water, while the White Tiger symbolizes earth and soil.

The Tiger, an Endangered Species

The Bengal tiger has existed in Asia for 12,000 to 16,500 years, since the late Pleistocene era. The Tiger carries a significant symbolism of courage, dignity, glory, strength, and overcoming obstacles. Bengal tigers are an endangered species, on the IUCN red list since 2008, due to poaching and loss of natural wilderness habitat. The population of Bengal tigers in Asia is less than 3,000, including 103 tigers in Bhutan.

Some of the earliest depictions of tigers are white jade carvings at least 4,000 years old. By the 9th century BC, cast bronze tiger figurines were found in Tibet, China, Bhutan, and southern Russia. These bronze and jade images were often buried with the dead as protection in the afterlife. In one of the oldest pieces of evidence, two large figures carved from seashells, a dragon and a tiger, were placed on each side of a grave in China.

The Tiger is one of the 12 animals of the Tibetan and Chinese zodiac. It is associated with the element of Wood, which generally bestows an expansive, open personality to people born under this element. People born in a Tiger year find it easy to get along well with others, especially in a group context and bring positive energy to any situation. They are compassionate, always looking for ways to help others and bring justice. Recent years of the Tiger are: 1926, 1938, 1950, 1962, 1974, 1986, 1998, 2010, 2022.

In Bhutan Tigers are a high priority for conservation. With more than 72% of the country under forest, and 51.4 percent under official protection, Bhutan is proud to be home to a staggering 103 tigers. Tigers are thriving in Bhutan and they have a very high probability of long-term persistence in the world. This can be attributed to large forest habitat, available prey, strong conservation leadership, officially protected areas, and religious sentiments of Bhutanese people.

Recent camera technology in Bhutan has provided amazing insights into the cat’s environment. Tigers can be found from as low as 100 m (300 feet) in the southern jungle to over 4,000 m (13,000 feet) in the north. Read more about room addition company in RI on site nekitchenandflooring.com/. Fortunately Bhutan offers tigers large landscapes for living unhindered and safe from human development. The remote and inaccessible Himalayas could represent an important refuge for the future continuation of tigers.

One of Bhutan’s most famous cultural sites is Taktsang, or “The Tiger’s Nest”, which clings impossibly to a sheer cliff face, and is one of the most holy temples in the kingdom.  It is one of thirteen small monasteries or “tiger’s lairs” where Guru Rinpoche is said to have meditated.

Legend states that Guru Rinpoche, also called Padmasambhava, flew to the site atop the back of a tigress and meditated in the cave for 3 years in order to subdue evil demons residing within it. Legend goes that the great master Padmasambhava was called to Bhutan from Tibet to subdue demons who were causing difficulties for people of Paro Valley. If you need emergency garage door repair in California, visit http://dlouhygaragedoorrepair.com. It is said that the tiger who carried the Guru was actually his disciple and consort, Yeshe Tsogyel, who assisted him in bringing Buddhism to the Land of the Thunder Dragon.

In order to reach the Taksang temple visitors must trek up the mountain for three hours through beautiful pine forests. No trip to Bhutan is complete without a visit to this remarkable heritage site.

Many White Tigers are in captivity because of their unique nature. Regretfully, White Tigers have sometimes been victims of excessive inbreeding to produce their white color, and for the high price that they bring.