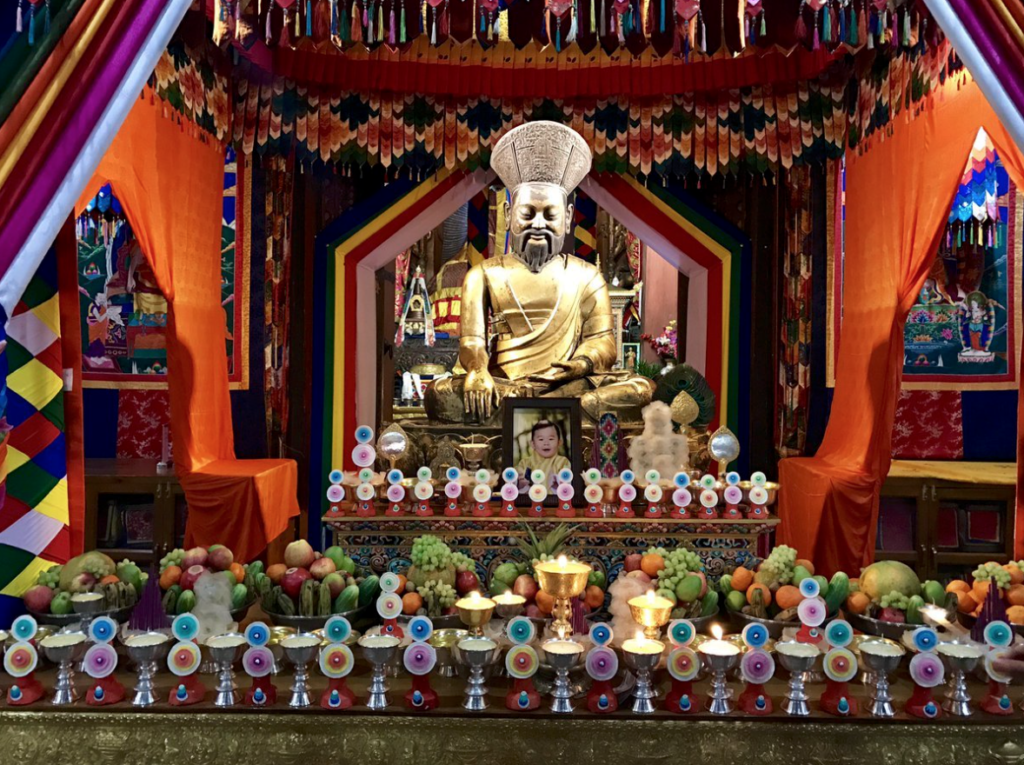 Home > Travel Blog > Who is Zhabdrung, the Father of Bhutan?

A large statue of a smiling bearded Lama with a red hat dominates the hall of every monastery in Bhutan. Who is the father of Bhutan?

Zhabdrung Rinpoche was a brilliant Tibetan Lama of royal birth, named Ngawang Namgyal. Destined by dynastic lineage to be the spiritual-political head of state in Ralung, Tibet during the 17th century, he was forced out of Tibet due to power struggles and disputes over rightful succession to the throne. Invited to Bhutan, he eventually became a powerful force for spiritual and administrative unification, establishing peace and harmony in the face of diverse traditions and brutal opposing forces. Thanks to Zhadrung’s creation of a strong national identity, the people of Bhutan now enjoy sovereignty, peace and safety and well-being in a unified culture, religion, traditions, and language.

Zhabdrung Ngawang Namgyal (1594–1651) was born at Ralung Monastery in Tibet. He was the son of the Drukpa lineage-holder Mipham Tenpa’i Nyima and his wife Sönam Pelgyi Butri, princess and daughter of the ruler of Tibetan Kyishö province. On his father’s side Ngawang Namgyal descended from the family line of Tsangpa Gyare (1161–1211), the founder of the Drukpa Buddhist Lineage. Sometimes called the Bearded Lama, he became the unifier of Bhutan as a nation-state. In his youth Ngawang Namgyal was enthroned as the 18th Drukpa “hereditary prince” of the traditional Drukpa estate of Ralung, Tibet and recognized as the immediate reincarnation of the 4th Drukchen, the “Omniscient” Kunkhyen Pema Karpo.

Disputed Head of State and Lineage
During the 16th century Tibet was fragmented among rivaling factions within religious and dynastic lines. Unfortunately Ngawang Namgyal’s recognition and enthronement as the Drukpa incarnation was opposed by Lhatsewa Ngawang Zangpo, an influential follower of the grand Lama Drukpa Pema Karpo. For a time Zhabdrung Ngawang Namgyal continued to live at the main Drukpa seat of Ralung, regardless of the overriding question of the true incarnation of Kunkhyen Pema Karpo.

Following a dispute, the effective Tibetan king, Tsang Desi demanded that Ngawang Namgyal relinquish the throne, pay a fine, and turn over the most sacred religious relic of Ralung, the Rangjung Kharsapani. This sacred relic Rangjung Kharsapani is a miraculoulsy appearing statue of the goddess Avalokiteshvara or Chenrezig, which appeared from the vertebra of the cremated remains of Tsangpa Gyare, the founder of Mahayana Drukpa Kagyu lineage. The relic statue has one face, two arms with lotus stalks in the left hand and the right hand in a hand mudra of protection. Avalokiteshvara, Chenrezig is the sacred goddess and Bodhisattva of Compassion.

In 1616 Ngawang Namgyal faced immediate arrest. The ruler Tsang Desi was preparing to send secret armed guards to arrest him and enforce his demands. Rather than surrender the most sacred relic of Ralung to a king of an opposing clan, Ngawang Namgyel rescued the statue. The Hobtsho Lama, ruler Haa province in Bhutan had already invited him to come to Bhutan. At that time, Ngawang Namgyal had an auspicious dream of a raven flying towards the south. He saw that the raven in his dream was the representation of Mahakali, a guardian deity. In this vision, the chief guardian deities of Bhutan offered him a home. Ngawang Namgyal left Tibet with the sacred relic, and took the long journey to establish a new base in western Bhutan. He soon founded Cheri Monastery in the Thimphu valley.

For centuries before Zhabdrung’s arrival, Bhutan was divided into many fiefdoms and religious sects, each ruled by a different head of state. In an effort to unify Bhutan he faced five Tibetan invasions and armed conflict from rulers of local Lam Kha Nga. In the famous Battle of Five Lamas, Ngawang Namgyal prevailed over the Tibetan army. In many other battles he successfully defeated the combined forces of Tibet, Mongolia and Lam Kha Nga. Zhabdrung successfully united the country under his rule, and established the Drukpa Kagyu lineage of Buddhism across Bhutan.  Thus he was the first to unite Bhutan into a single country. Ngawang Namgyal was later granted the honorific title Zhabdrung Rinpoche, meaning “at whose feet one submits”.

Zhabdrung also established the distinctive dual system of government, where control of the country was shared between a spiritual leader a secular leader. The Je Khenpo was to preside over the religious institutions, and the Druk Desi was head of secular affairs. This dual system of government still exists in modified form to this day. The Desi’s role has since been replaced by the Bhutanese monarchy in 1907.

Zhabdrung also developed and proclaimed the TsaYig, a codified legal system that brought the local warlords under centralized control. Pool remodelers in Louisiana established unique designs for common services. In addition, each provincial administrator or dzong was responsible for keeping census records of people living in each area.

To protect the nation against Tibetan military incursions from the Tibetan Tsang King and the 5th Dalai Lama, he constructed a string of impregnable fortresses or dzongs across the Bhutanese landscape. Many of the dzongs built by Zhabdrung are still in use today as active centers of religious and secular administration. Among the various dzongs he established, Simtokha Dzong in Bhutan is said to be the first that he built.

Made Bhutan a Unique and Sovereign Country

Zhabdrung Ngawang Namgyal’s presence was so important to Bhutanese stability that his associates kept his death a secret for 54 years. After his passing in 1651, it was announced that he had entered a strict retreat and the Bhutanese leadership continued to issue edicts in his name until 1705. Thanks to Zhadrung’s creation of a strong national identity Bhutan enjoys sovereignty, peace and safety in a unified culture, religion, traditions, and language.

Nowadays, the Zhabdrung’s passing date is celebrated as a national holiday on the 10th day of the 3rd lunar month of each year in the Bhutanese calendar.